With its velvety texture and sweet taste, cheesecake is at the top of many people’s favorite desserts list.

Cheesecake typically consists of a layer made with cheeses — usually cream cheese, ricotta cheese, or cottage cheese — plus eggs and sugar.

Classic cheesecake is usually flavored with vanilla extract, but cheesecakes come in other flavors as well, from chocolate to pumpkin spice.

While there’s no doubt cheesecake is delicious, some people may wonder whether or not it can fit into a healthy diet. Spoiler alert! It can.

This article takes a look at the nutritional value of cheesecake and shares recipe ideas for cheesecake lovers, including dairy-free and low carb alternatives.

It shouldn’t come as a surprise that traditional cheesecake is high in calories, fat, and carbohydrates. After all, its main ingredients are cheese, eggs, and sugar.

However, there can be some nutritional differences between cheesecakes, depending on what they’re made with.

Most cheesecakes are high in fat and carbs and provide a bit of protein from the dairy products and eggs used in the recipe.

Because they’re sweetened, cheesecakes typically contain a large amount of added sugar. For example, the chocolate cheesecake above packs 21.2 grams of added sugar per 100-gram serving. That’s more than 5 teaspoons of sugar ().

Some cheesecakes are made with ingredients like low or zero-calorie sweeteners like erythritol or allulose to make them suitable for those on lower-carb diets.

These products are much lower in carbs compared to traditional cheesecakes and can be lower in calories, too.

Because cheesecake is traditionally made from dairy — which doesn’t fit into many people’s diets — some companies offer vegan cheesecake products made with ingredients like coconut and pea protein.

However, just because it doesn’t contain dairy doesn’t mean it’s lower in calories and sugar than traditional cheesecake.

In fact, the vegan cheesecake product is highest in calories and contains the same amount of sugar as the chocolate cheesecake product, though the serving size is larger compared to the other desserts on the chart.

This is why it’s important to read nutrition and ingredient labels when shopping for cheesecake.

Like the majority of desserts, most cheesecakes are high in calories, carbs, fat, and sugar. However, the exact nutritional profile will depend on ingredients used.

Many foods aren’t created for health benefits. Rather, they’re meant to be enjoyed in small amounts for their taste and texture.

Just like other desserts like ice cream and pie, cheesecake shouldn’t be consumed for its nutritional value.

Sure, cheesecake does contain nutrients like protein, calcium, and selenium, but it’s also rich in calories and high in fat and sugar, meaning it shouldn’t make up a large part of your diet ().

However, this doesn’t mean cheesecake needs to be completely avoided. Small amounts of any dessert, including cheesecake, can fit into most diets.

As long as you’re following an overall nutritious eating pattern while enjoying cheesecake on occasion, it won’t have a major effect on your health.

On the other hand, eating sweets like cheesecake too often canharm health and increase disease risk.

If your diet is high in foods and drinks like cheesecake, candy, soda, and ultra-processed snack foods, it’s best to cut back on these products and replace them with nutrient-dense foods like fruits, vegetables, and legumes.

This can help reduce your risk of health conditions linked to high added sugar intake and excess calorie consumption, such as obesity and type 2 diabetes (, ).

Cheesecake is not considered a nutritious food. However, it can be enjoyed on occasion in small amounts as part of a healthy, well-rounded diet. Eating it occasionally shouldn’t affect your health.

Most cheesecakes are high in calories, fat, and sugar.

If you eat sweets like cheesecake too often, it could negatively affect your health in a number of ways.

Cheesecake is typically made with high calorie ingredients like cream cheese, sour cream, and butter.

For this reason, cheesecake can pack in a surprising amount of calories.

For example, a slice of Caramel Pecan Turtle Cheesecake from the popular chain restaurant The Cheesecake Factory packs 1,330 calories. That’s over half the calories that most people need on a daily basis to maintain their weight (, 8).

Even though having a slice of your favorite cheesecake on occasion won’t significantly affect your body weight, eating cheesecake and other high calorie desserts too often can lead to unwanted weight gain.

Consider sharing a slice with a friend or eating half of your slice and taking the other half home to freeze.

Most cheesecakes are high in added sugar, with many containing well over the recommended amount of daily added sugar in a single slice.

The American Heart Association recommends that adult men and women limit their added sugar intake to no more than 9 teaspoons (36 grams) and 6 teaspoons (25 grams) per day, respectively ().

As you can see, sugar adds up fast, and it’s easy to exceed the recommended limits — especially if you regularly eat foods like cheesecake.

Consuming too much added sugar can harm your health in many ways, from elevating your risk of liver disease to increasing levels of harmful visceral fat located in your abdominal cavity, surrounding your organs (, , ).

High levels of visceral fat are linked to increased disease risk, including the risk of cardiovascular disease, in both adults and kids (, , ).

Some types are highly processed

Homemade cheesecakes are usually made with simple ingredients like eggs, cream cheese, sour cream, and sugar.

On the other hand, commercially-made cheesecakes can contain a number of ingredients like fillers, stabilizers, and artificial colors, sweeteners, and flavors, which some people prefer to leave out of their diets.

In general, ultra-processed foods like commercially-prepared cheesecakes should be limited in any healthy diet.

Diets high in ultra-processed foods have been linked to a number of health issues, such as an increased risk of heart disease, obesity, and type 2 diabetes (, , ).

Cheesecakes tend to be high in calories and added sugar and some are highly-processed. Like all high calorie and high sugar desserts, it’s best to limit your intake of cheesecake and enjoy it only on occasion.

If you’re a cheesecake lover, you may wonder whether you can make cheesecake a bit healthier by changing up the ingredients.

Also, some people may want cheesecake recipe options that better align with their dietary preferences, such as paleo or low carb.

Fortunately, there are a number of recipes that use lower amounts of sugar and swap in some more nutritious ingredients to create delectable cheesecake-inspired desserts.

And for those who can’t tolerate dairy, there are ways to make cheesecake dairy-free — and vegan, too!

Many people love the taste of cheesecake but want or need to avoid dairy. Fortunately, there are ways to make creamy cheesecake without the dairy.

Keep in mind that just because a product is vegan or paleo, it doesn’t necessarily mean the food is “healthy.” Vegan products can contain just as many calories and grams of sugar as traditional cheesecake.

Here are some delicious dairy-free cheesecake recipes for those who can’t — or choose not to — consume dairy.

For people following lower carb diets, cheesecake can be a dessert option, as long as it’s low in carbs and gets its sweetness from sugar alternatives like monk fruit.

These low carb desserts can be good options for those with diabetes as well.

Here are a couple of low-carb cheesecake recipes:

Although these recipes are helpful alternatives for those following specific diets or for people who want to cut back on added sugar, there’s nothing wrong with enjoying traditionally-made cheesecake once in a while.

If cheesecake is your favorite treat, then enjoy it! Just be sure to limit cheesecake in your diet as you would any other high calorie, sugary dessert.

It’s possible to make cheesecake lower in carbs and use ingredients like cashews and coconut to make dairy-free versions.

Cheesecake is a creamy, sweet treat that’s traditionally made with ingredients like cream cheese, eggs, and sugar.

It’s high in calories, sugar, and fat, so it’s important to limit cheesecake in your diet, just as you would any dessert. However, there’s nothing wrong with enjoying this dessert from time to time as part of a healthy, well-rounded diet.

For those who want to experiment with lower carb, vegan, and paleo cheesecake recipes, there are plenty of recipes available online to suit these preferences.

Love wearing heels? Here are some health tips to avoid pain or risk of injury | Health

Thu Jul 21 , 2022
Heels are definitely one of the most stylish footwear for women and research has shown that when they did a biomechanical analysis of a woman’s gait in heels, it was found to be more feminine. She had shorter strides and more rotation at the pelvis adding to the charm and […] 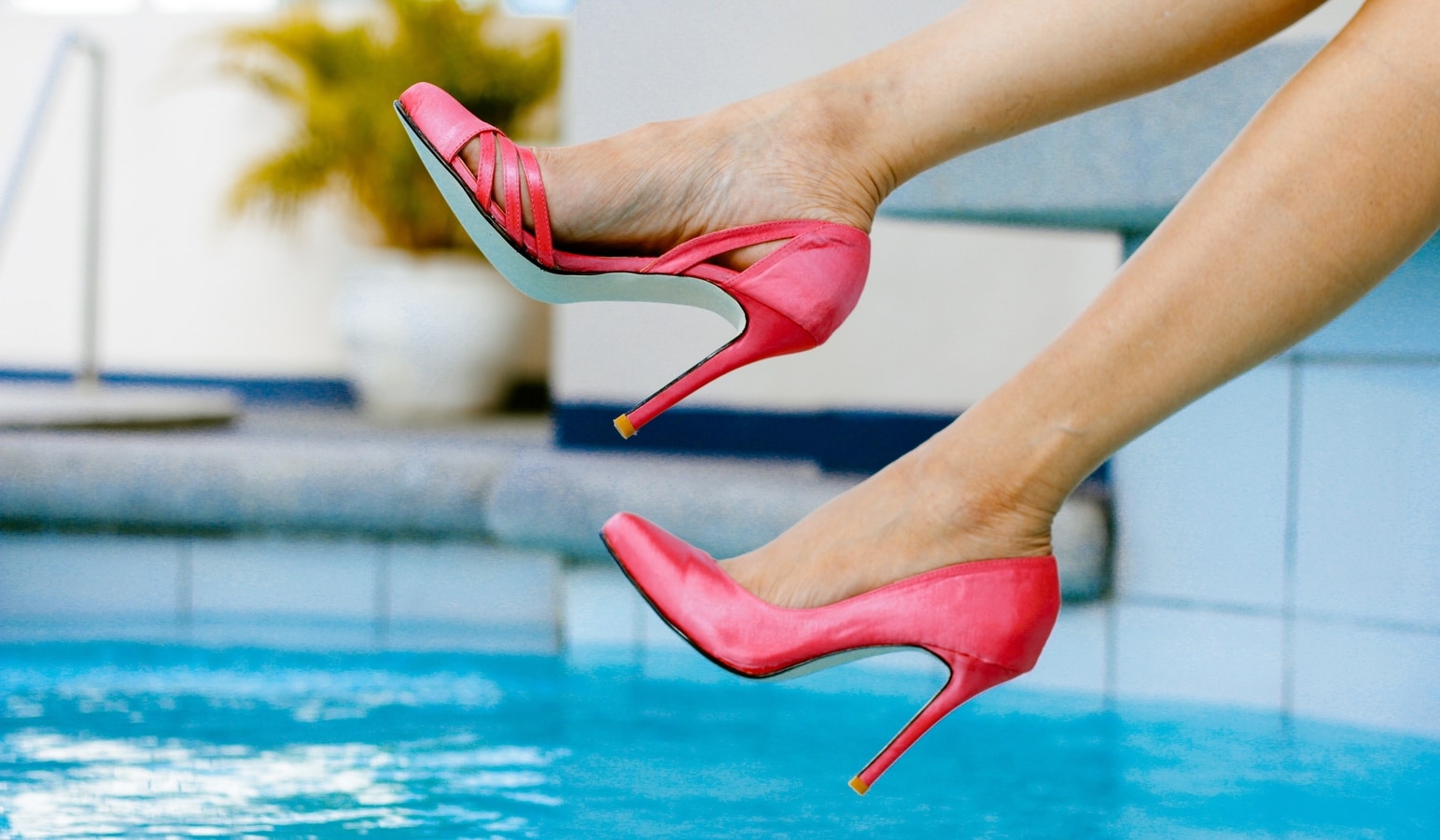